Sorting waste has become second nature to Finnish consumers, but in many developing countries, recycling is just taking its first baby steps. In Vietnam, however, recycling took a major leap forward in 2013 when a composting plant delivered by Ferroplan began operation in the province of Binh Duong, about 50 km from Saigon.

Now this southern Vietnamese province can turn waste into money, since organic matter can be composted and recyclable material recovered with ease. Each hour, the plant produces around six tonnes of organic material that can be sold on.

‘Our composting plant is a true forerunner in local infrastructure design. University students and other visitors arrive in busloads to view the plant’s operations and solutions. By local standards, the investment is exceptionally large, but it sets an excellent precedent in a society that is developing rapidly,’ explains Miika Koskela, Ferroplan’s project manager for environmental projects.

Of the full seven-million-euro investment, about half was allocated to infrastructure, such as buildings, wheel loaders, and compost-turners, while the remainder was put towards acquiring sorting-line equipment.

In Vietnam, waste is not generally sorted before disposal. It gets disposed of in a single container. So the composting plant has its work cut out for it, and the processing of waste consists of several steps. The plant receives 420 tonnes of mixed waste each day, all year round, and this waste must be screened for material suitable for composting. Recyclable materials, such as aluminium, which is abundant in mixed waste in Vietnam, must be separated out manually. Even when it can’t be reused as-is, aluminium has monetary value, so its recovery is well worth the effort.

‘In addition to organic waste, iron and other magnetic material is separated out mechanically, but several of the processes at the plant are performed manually. Because jobs are important for a developing country, there is no urgent need to replace all manual work phases with technology,’ Koskela explains.

In projects involving international collaboration, the supplier must have knowledge of local conditions and factors such as differences in work culture. Koskela’s position in supervising on-site electrical work afforded him a unique vantage point for observing these differences. On occasion, there were only four men working at the project site, instead of the 10 expected. The work on the site was monitored also by Ferroplan’s Finnish project manager, who relocated to Vietnam for several years.

Even though not all processes can be mechanised, a reliable supplier can contribute to safe work conditions and appropriate work processes on the manual line. Western principles for working life represent an important step towards a more industrialised society.

Ferroplan shouldered overall responsibility for the long and challenging project, and it selected the other suppliers required for the completion of the work. In the end, three partners were chosen for the project, including another Finnish company Allu Finland Oy. According to Koskela, one of Ferroplan’s strengths is that it is not tied to any particular suppliers so can freely select the most suitable partners for each project.

The resulting mature compost is then screened on the basis of size. Some of the material is used for landscaping the local landfill, which also brings financial benefits for the customer. Other material is packed in bags and sold as compost. 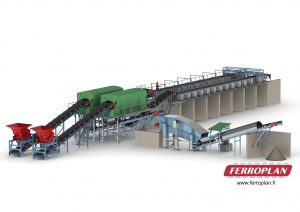 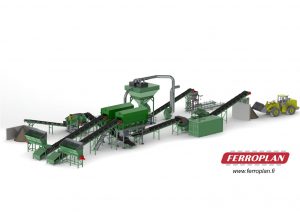